For the last twenty years, the research on High Entropy Alloys (HEAs) has been gaining ground to the conventional alloys due to their promising combination of properties that could lead to a future application in the transportation and energy industry. In parallel, the implementation of Additive Manufacturing (AM) is becoming an actual commodity for manufacturing components. That is why the design, production and characterization of HEAs optimized for AM is one of the goals to achieve in the MAT4.0 project.

Most of the current studies in HEAs use cobalt as an alloying element, especially those with an FCC crystalline lattice. According to the European Commission, cobalt is a critical raw material (CRM) for the EU. For this reason, part of this project’s scope has been focused on substituting this element with others that could have similar effects (i.e., stabilize the FCC and promote solid solution hardening). Another factor that motivates the substitution of cobalt is the implementation of this alloy in some critical structural components in nuclear power plants because the irradiation activates cobalt under significant exposure times.

Taking into account that the implementation of these materials in the AM is relatively new, and no similar alloys have been developed, these recently designed HEAs candidates require undertaking a preliminary investigation on conventionally (casting) produced samples, concerned with the characterization of the thermal stability and properties before deciding which one is the most suitable material for its subsequent atomization and 3D printing.

The initial target was to evaluate the improvements achieved after substituting Co by Mn. This latter element was regarded as a promising potential candidate due to its decisive role as an FCC stabilizer and solid solution hardener. This way, two families of HEAs were considered (CoCrFe2Ni2 and MnCrFe2Ni2) with different additions of Cu and Mo, where Cu is added to obtain additional FCC stabilization, where Mo is mainly intended to increase the solid solution hardening effect. Thus, six different alloys for each family were produced by casting, followed by homogenization and hot-forging processing treatments. This processing led to a partially recrystallized microstructure. The three most promising alloys were investigated in more detail.

The thermal stability of these alloys was evaluated via performing heat treatments above 700 ºC up to 1200 ºC. The formation of Mo/Cr-rich intermetallic phases was observed after holding for a few hours below 950 ºC. These phases nucleated first at the grain boundaries and later extended to the intragranular regions of the FCC matrix (Example in Fig.1(a)). The kinetics of precipitation of these intermetallics was accelerated by the presence of Mo. On the other hand, fully recrystallization after few minutes holding was only observed after heating to or above 1100 ºC. However, increasing the Cu content promoted the co-segregation of Cu-Mn at the grain boundaries above 1150 ºC (Example in Fig. 1(b)). In the Co-alloyed HEAs, this segregation did not occur. From the gathered results it was possible to conclude that from the family of MnCrFe2Ni2 alloys, the most suitable one to proceed with the atomization and printing was the one containing 6.7 at.-% of Cu and 3.3 at.-% of Mo.

The additive manufacturing studies currently under development focus on determining the proper printing parameters to avoid any defects, such as porosity or cracks. An example of the test specimens produced is shown in Fig. 2.

In this particular MAT4.0’s framework, the collaboration of Materalia Group (CENIM-CSIC) researchers and IMDEA Materials researchers are pushing forward to determine the proper printing condition of the HEAs atomized powders. Besides, a computational thermodynamics assisted approach is being currently used to conceive new HEAs’ compositions for additive manufacturing, exploring substituting Cu/Mo by other elements. 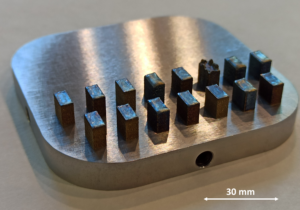 FUNDACIÓN IMDEA MATERIALES uses its own and third-party cookies to measure activity for analytical purposes and guarantee the functionality and security of the website. If you continue browsing, we will consider that you accept its use.
Necessary Always Enabled
Necessary cookies are absolutely essential for the website to function properly. This category only includes cookies that ensures basic functionalities and security features of the website. These cookies do not store any personal information.
Non Necessary
Any cookies that may not be particularly necessary for the website to function and is used specifically to collect user personal data via analytics, ads, other embedded contents are termed as non-necessary cookies. It is mandatory to procure user consent prior to running these cookies on your website.
Necesarias
Las cookies necesarias son absolutamente esenciales para que el sitio web funcione correctamente. Esta categoría solo incluye cookies que garantizan funcionalidades básicas y características de seguridad del sitio web. Estas cookies no almacenan ninguna información personal.
Save & Accept